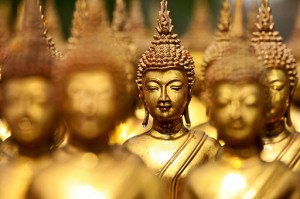 Thailand is indeed known as the Land of Smiles. Rightly so because it has among the world’s best attractions, the best people and the well-respected and well-loved monarch. However, these are not all as there are a lot of other interesting facts about Thailand.

Are you after the size?

Yes, it is true that Thailand is not among the largest of countries in terms of land area and population but it does have some of the world’s largest such as the largest golden Buddha.

The Wat Traimit is the temple that houses the golden Buddha which is more than 15 feet tall. It is made up of 18 karat gold and surely be very expensive. However, not everyone knew then of its existence because it was covered in plaster not until around 1955 when it was transferred from its previous site to another site. The rope hosting the image snapped causing for it fall and its plaster cover cracked, exposing the massive golden Buddha underneath.

What year is it?

Currently, it is year 2557 in Thailand and 2014 in majority of the countries around the world.
Confusing? It is really for those who are date-conscious.

Thailand utilizes the Buddhist form in writing the year thus 2557 for year 2014.

Thailand is a constitutional monarchy state and its King, King Bhumibol Adulyadej (Rama IX), is at present the world’s longest serving monarch having been in the position since June 9, 1946 but he was only crowned as King in May 5, 1950. A well-loved monarch, the King is the symbol of national unity in Thailand.

The Longest Name of a Place

If Thailand has the largest golden Buddha, it also has the longest name for a place. While widely known as Bangkok, its real name is actually “Krung Thep Mahanakhon Amon Rattanakosin Mahinthara Ayuthaya Mahadilok Phop Noppharat Ratchathani Burirom Udomratchaniwet Mahasathan Amon Piman Awatan Sathit Sakkathattiya Witsanukam Prasit” which can be translated to “The city of angels, the great city, the residence of the Emerald Buddha, the impregnable city (of Ayutthaya) of God Indra, the grand capital of the world endowed with nine precious gems, the happy city, abounding in an enormous Royal Palace that resembles the heavenly abode where reigns the reincarnated god, a city given by Indra and built by Vishnukarn.”1

Prior to 1939, Thailand is still known as Siam and several decades before that year, conjoined twins Chang and Eng were born in the Kingdom. During their teenage years, they were brought to the United States by Captain Abel Coffin where they were shown in public exhibition.

They were labeled as “The Siamese Double Boys”2 and the alternative name for conjoined twins is still being used today.

One Reply to “Five Interesting Facts About Thailand”