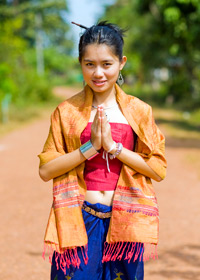 Things You Need To Know About Thai Etiquette

Traveling to Thailand where customs and traditions are very strong increases the possibility of you transgressing from the culturally accepted practices of the country especially if you have not done your homework about the Kingdom. Although Thais are known to be very understanding on foreigners committing a mistake or two, knowing the dos and don’ts of the Kingdom allows you to enjoy a lot more of Thailand without having the fear of insulting anyone or breaking a traditionally accepted norm.

So if you already have your tickets and your accommodation in Chiang Mai has already been booked for a week, forget your own practices in your country for a while and then read ahead about Thai etiquette with an open mind as these can either be partly or completely different with what you are used to back home.

The spoon not the fork

If in the west, using the fork to deliver food straight to your mouth is alright, in Thailand such gesture is a big no-no. In the Kingdom, only the spoon can feed your mouth with unless what you are eating is a noodle then you will have to use a pair of chopsticks for it.

Leave your shoes outside

It is not strange in Thailand when visitors are asked to leave their shoes outside the hosts’ home or even in public places like restaurants. This practice may be familiar with you as it is a practice also common among other countries in Asia.

When someone do the wai at you, it is imperative that you should make the same gesture as a reply to him as it is both a sign of respect as well as a greeting. However, the person with the younger age is expected to do such gesture first to someone older than him.

Opinion and the volume of the voice

In western societies, public criticism or raising someone’s voice to dispute another is generally accepted but not in Thailand. In the Kingdom, self-control and compromises are heavily emphasized so if you happen to disagree with someone in Chiang Mai, make sure not to raise your voice on him.

If you are used to touch someone’s head (especially children) as your gesture for appreciation, refrain from doing so in Thailand as it is considered as the sacred part of the human body and touching it is generally not tolerated.

If there is really the need for you to spit, refrain from doing so in public as you can raise some eyebrows with such. You may do so in the toilet.

Discussed above are only a few of so many Thai society-accepted cultural practices that the possibility of you committing an infraction may still happen. But, your knowledge on some of these only increases your level of awareness and sensitivity to Thai culture and surely the people of Thailand will appreciate your efforts of learning and practicing their traditions, a trait in which they are well known for.